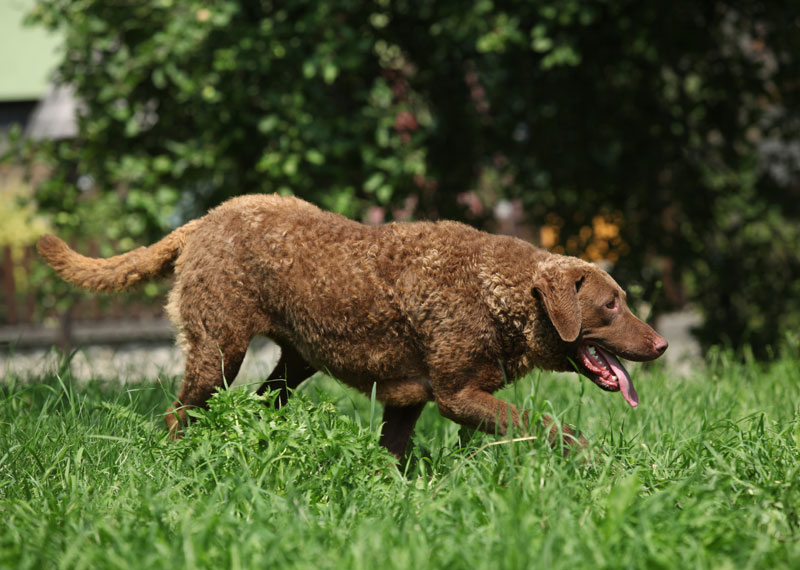 The Chesapeake Bay Retriever is a breed of dog belonging to the Retriever, Gundog, and Sporting Breed Groups. Members of the breed may also be referred to as a Chessie, CBR or Chesapeake. The breed was developed in the United States Chesapeake Bay area during the 19th century. Historically used by area market hunters to retrieve waterfowl, it is primarily a family pet and hunting companion. They are often known for their love of water and their ability to hunt. It is a medium to large sized dog similar in appearance to the Labrador Retriever. The Chesapeake have a wavy coat, rather than the Labrador's smooth coat. They are described as having a bright and happy disposition, courage, willingness to work, alertness, intelligence, and love of water as some of their characteristics.

Chesapeake Bay Retrievers trace their history to two pups who were rescued from a foundering ship in Maryland in 1807. The male "Sailor" and female "Canton" were described as Newfoundland, but were more accurately Lesser Newfoundland or St. John's water dogs. These two lived in different parts of the bay area and there is no record of a litter being produced together. They were bred with area dogs, with more consideration given to ability than to breed, to create the beginnings of the Chesapeake Bay Retriever breed. There are few records of the breeds of these early dogs, but spaniels and hounds were included. Dogs from both Chesapeake Bay shores were recognized as one of three types of Chesapeake Bay Ducking Dog in 1877. In 1918 a single type, called the Chesapeake Bay Retriever, was recognized by the American Kennel Club, and there have been few changes to the breed standard since then.George Law, who rescued the pups, wrote this account in 1845 which appears on the website of the American Chesapeake Bay Retriever Club::In the fall of 1807 I was on board of the ship Canton, belonging to my uncle, the late Hugh Thompson, of Baltimore, when we fell in, at sea, near the termination of a very heavy equinoctial gale, with an English brig in a sinking condition, and took off the crew. The brig was loaded with codfish, and was bound to Pole, in England, from Newfoundland. I boarded her, in command of a boat from the Canton, which was sent to take off the English crew, the brig's own boats having been all swept away, and her crew in a state of intoxication. I found onboard of her two Newfoundland pups, male and female, which I saved, and subsequently, on our landing the English crew at Norfolk, our own destination being Baltimore, I purchased these two pups of the English captain for a guinea apiece. Being bound again to sea, I gave the dog pup, which was called Sailor, to Mr. John Mercer, of West River; and the slut pup, which was called Canton, to Doctor James Stewart, of Sparrow's Point. The history which the English captain gave me of these pups was, that the owner of his brig was extensively engaged in the Newfoundland trade, and had directed his correspondent to select and send him a pair of pups of the most approved Newfoundland breed, but of different families, and that the pair I purchased of him were selected under this order. The dog was of a dingy red colour; and the slut black. They were not large; their hair was short, but very thick-coated; they had dewclaw. Both attained great reputation as water dog. They were most sagacious in every thing, particularly so in all duties connected with duck-shooting. Edward Lloyd (Governor of Maryland) exchanged a Merino ram for the dog, at the time of the Merino fever, when such rams were selling for many hundred dollars, and took him over to his estate on the eastern shore of Maryland, where his progeny were well known for many years after; and may still be known there, and on the western shore, as the Sailor breed. The slut remained at Sparrows Point till her death, and her progeny were and are still well known, through Patapsco Neck, on the Gunpowder, and up the bay, amongst the duck-shooters, as unsurpassed for their purposes. I have heard both Doctor Stewart and Mr. Mercer relate most extraordinary instances of the sagacity and performance of both dog and slut, and would refer you to their friends for such particulars as I am unable, at this distance of time, to recollect with sufficient accuracy to repeat.Mercer is said to have described Sailor::... he was of fine size and figure-lofty in his carriage, and built for strength and activity; remarkably muscular and broad across the hips and breast; head large, but not out of proportion; muzzle rather longer than is common with that race of dogs; his colour a dingy red, with some white on the face and breast; his coat short and smooth, but uncommonly thick, and more like a coarse fur than hair; tail full, with long hair, and always carried very high. His eyes were very peculiar: they were so light as to have almost an unnatural appearance, something resembling what is termed a wail eye, in a horse; and it is remarkable, that in a visit which I made to the Eastern Shore, nearly twenty years after he was sent there, in a sloop which had been sent expressly for him, to West River, by Governor Lloyd, I saw many of his descendants who were marked with this peculiarity.In 1964, it was declared the official dog of Maryland.It is the mascot of the University of Maryland, Baltimore County.Members of the breed were owned by General George Armstrong Custer, President Theodore Roosevelt, and actors Paul Walker and Tom Felton.

The breed is subject to a number of hereditary diseases. These include, but are not limited to:*Hip dysplasia (canine)
*Progressive retinal atrophy
*Type 3 von Willebrand disease
*Cataract
*Regional Alopecia in both sexesA UK Kennel Club survey puts the median lifespan of the breed at 10.75 years (average 9.85). A US breed club survey puts the average lifespan at 9.4 years. 1 in 4 lived to 13 years or more while 1 in 5 don't live past 5 years.