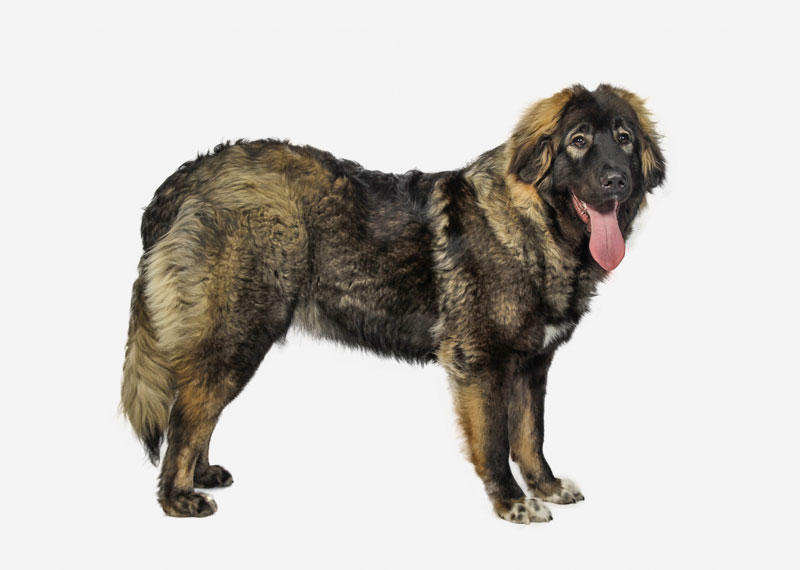 * The Armenian dogs are divided into the large, longhaired and often multicoloured type and the slightly smaller wolf-grey dogs of medium-length coat with longer muzzles.
* Daghestan dogs are tall, wide-headed and athletic, short-haired and multicoloured.
* Astrakhan type is found in the Kabardino-Balkarian region and is believed to be a cross between the Russian show type and the old Circassia and Georgian mountain dog, but Balkarian Molossers are also rooted in the Sarmatian Mastiff.
* The Turkish Caucasus dogs are divided into four types, those being the Garban, the Georgian Akhaltsikhe type, the Circassian variant and the Kars Dog.
* The large, short-muzzled, shorthaired fawn, brown, red, with or without white markings and extremely vicious Garban (Gorban) was developed from the Kars and the Kangal, as well as other Turkish dogs being crossed with the Armenian and Georgian types.
** The Georgian people Akhaltsihnske type was created from Garban crosses with the Georgian Nagazi variant and gomik turkey,resulting in longhaired, lightly built solid-coloured white, fawn and grey dogs. The Circassian variant is believed to be a result of crossing the Kangals with the Cherkes dogs introduced to Turkey after the Russian-Circassian wars.
** The Kars Dog is a variety closely associated with the Kars Province of modern Turkey and is today seen as a separate breed. The Armenian Gamprs are smaller than the Georgian dogs and are shorter-necked and squarely built, and come in a variety of colors.
* The Volkodav variant also comes in two types, with the longhaired mountain and short-coated steppe dogs both being smaller than Georgian and Armenian types, always having melanistic mask.
* A result of Canine reproduction#Copulation between the dogs of southern Kavkaz with the Sage Mazandarani and the Kars Dog of Turkey, the Iranian Sage Ghafghazi is a lean, powerful and richly coated English Mastiff, used as a caravan protector of the Shahsavan nomads, who have been breeding it since the 17th century. These Iranian Caucasians come in a variety of colours, both solid and bicoloured.
* There is also a rare short-haired Kavkaz mastiff, known as the North-Caucasian Volkodav, which is on its way to receive a separate breed recognition.
A short haired breed of this dog with a very aggressive attitude towards any one who is not the care taker of the animal exists in Iran. Normally black or black and yellow color, it is called a "sage gorgy" (Wolf dog). This dog is used for home protection, farm animal protection, and other efforts. This dog is often kept as a solitary dog because of its aggressive temper.As mentioned above, most working Caucasian dogs are hybrids between established types, as well as some lines of the Central Asian dogs, in effect making the Russian show type appear to be a superior-breed dog in the eyes of fanciers. There are two types, the working strain in the east and the show dogs in the west. The fighting strains of the Caucasian Ovcharka can contain blood of some European breeds, from mastiffs to Bandogs, but these crosses are a minority in the breed. Current bloodlines have been crossed with Newfoundlands and other like breeds to create a looser lipped, heavier headed dog for Western show rings. Historically, the Caucasian Molossers were used for centuries to protect properties, guard livestock, kill wolves, and hunt bears. Today, especially outside the Caucasus, they are employed as companion animals and watchdogs. Most prized as a property guardian, the Caucasian Shepherds are good protectors. The Caucasian Mountain Dog is a low activity dog, seemingly lethargic when not working, but agile and convincing when it feels its family is threatened. Although certain strains are more vicious than others, all Caucasians are very territorial and dog-aggressive, needing early and careful broad socialization, as well as firm, but never forceful, handling. This breed can be a family dog, if well trained and socialized.