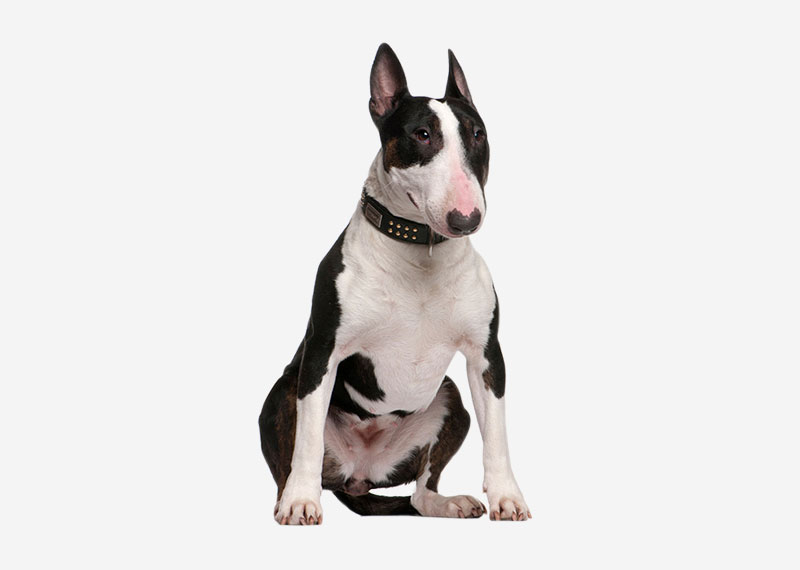 The Bull Terrier is a dog breed in the terrier family. There is also a miniature version of this breed which is officially known as the Bull Terrier (Miniature).

Early in the mid-19th century the "Bull and Terrier" breeds were developed to satisfy the needs for vermin control and animal-based blood sports. The "Bull and Terriers" were based on the Old English Bulldog (now extinct) and one or more of Old English Terrier and "Black and tan terrier", now known as Manchester Terrier. This new breed combined the speed and dexterity of lightly built terriers with the dour tenacity of the Bulldog, which was a poor performer in most combat situations, having been bred almost exclusively for fighting bulls and bears tied to a post. Many breeders began to breed bulldogs with terriers, arguing that such a mixture enhances the quality of fighting. Despite the fact that a cross between a bulldog and a terrier was of high value, very little or nothing was done to preserve the breed in its original form. Due to the lack of breed standards—breeding was for performance, not appearance—the "Bull and Terrier" eventually divided into the ancestors of "Bull Terriers" and "Staffordshire Bull Terriers", both smaller and easier to handle than the progenitor.About 1850, started breeding "Bull and Terriers" with "English White Terriers" (now extinct), looking for a cleaner appearance with better legs and nicer head. In 1862, Hinks entered a bitch called "Puss" sired by his white Bulldog called "Madman" into the Bull Terrier Class at the dog show held at the Cremorne Gardens in Chelsea. Originally known as the "Hinks Breed" and "The White Cavalier", these dogs did not yet have the now-familiar "egg face", but kept the stop in the skull profile.The dog was immediately popular and breeding continued, using Dalmatian, Greyhound, Navarran Pointer, Foxhound and Whippet to increase elegance and agility; and Borzoi and Collie to reduce the stop. Hinks wanted his dogs white, and bred specifically for this. Generally, however, breeding was aimed at increasing sturdiness: three "subtypes" were recognised by judges, Bulldog, Terrier and Dalmatian, each with its specific conformation, and a balance is now sought between the three. The first modern Bull Terrier is now recognised as "Lord Gladiator", from 1917, being the first dog with no stop at all. Due to medical problems associated with all-white breeding, Ted Lyon among others began introducing colour, using Staffordshire Bull Terriers in the early 20th century. Coloured Bull Terriers were recognised as a separate variety (at least by the AKC) in 1936. Brindle is the preferred colour, but other colours are welcome.Along with conformation, specific behaviour traits were sought. The epithet "White cavalier", harking back to an age of chivalry, was bestowed on a breed which while never seeking to start a fight was well able to finish one, while socialising well with its "pack", including children and pups. Hinks himself had always aimed at a "gentleman's companion" dog rather than a pit-fighter—though Bullies were often entered in the pits, with some success. 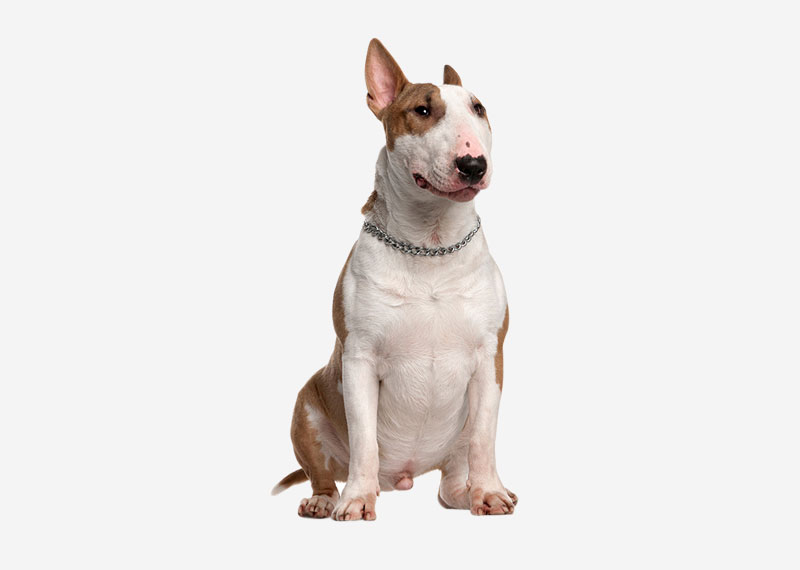 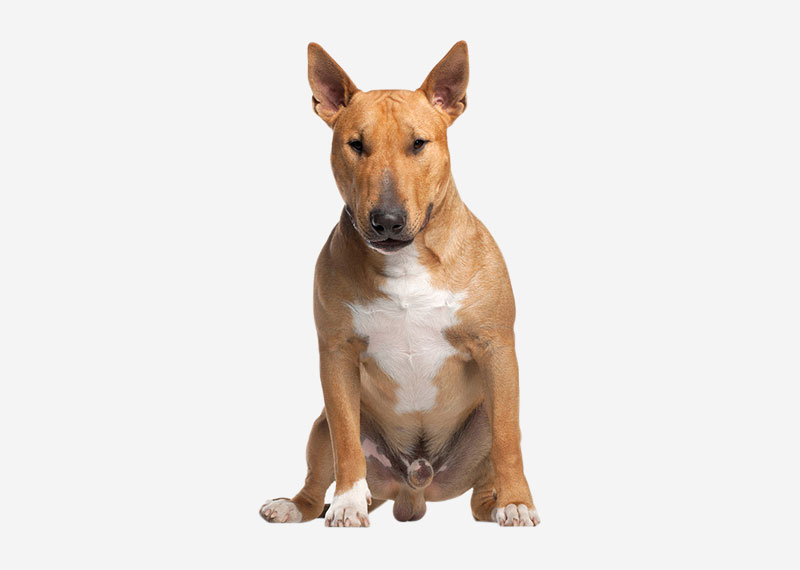 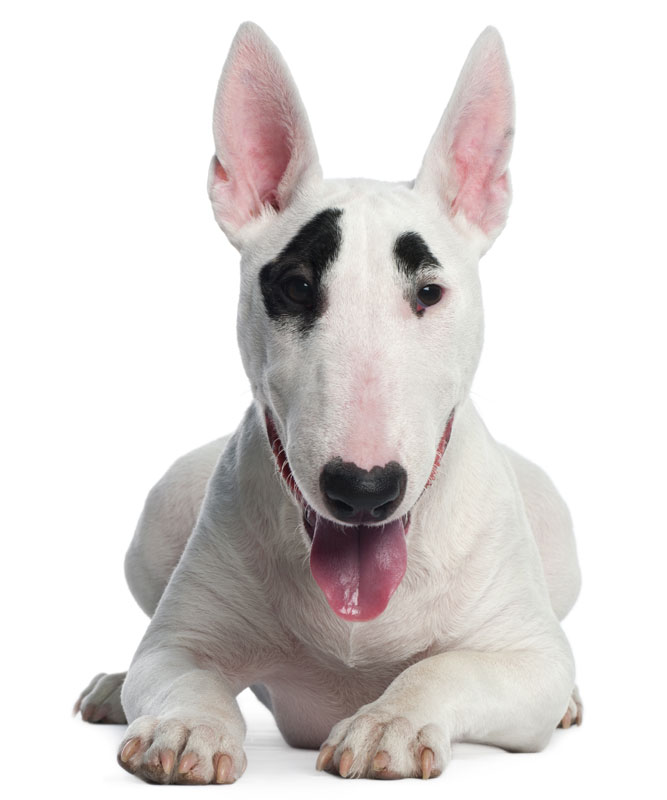 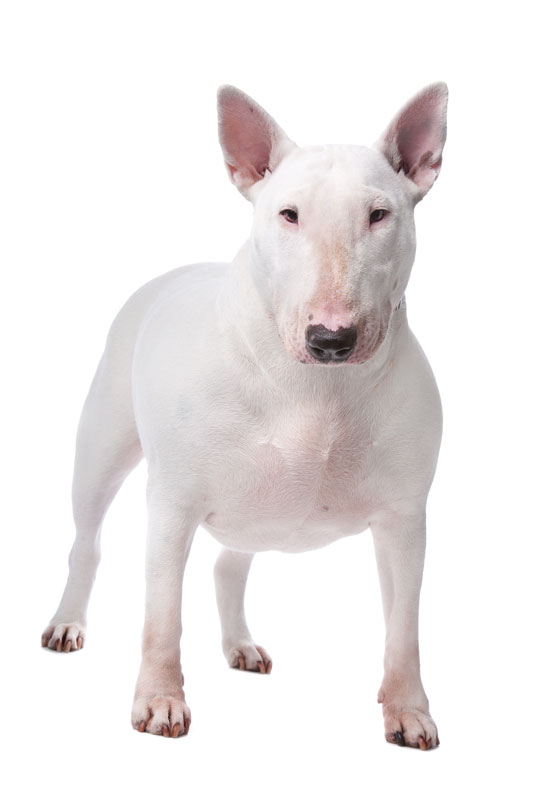