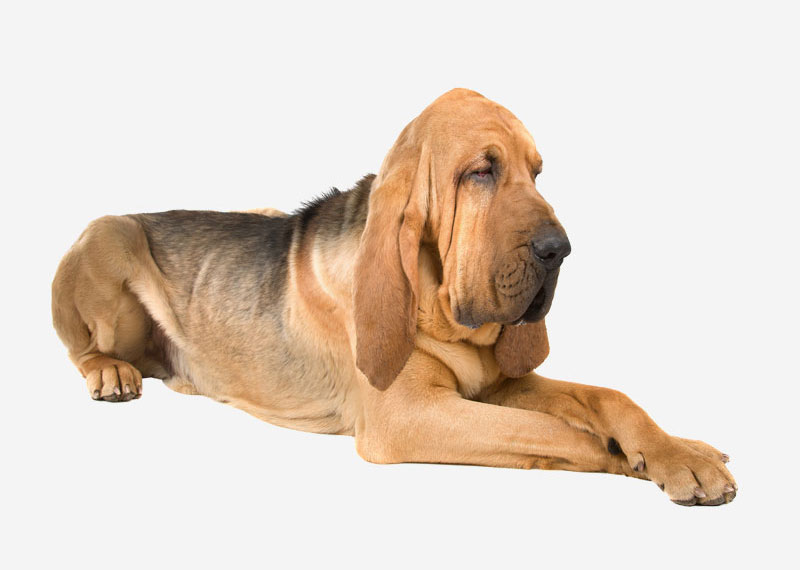 The Bloodhound is a large scent hound originally bred for hunting deer and wild boar, but also used from the Middle Ages onwards for tracking human beings, and now most often bred specifically for that purpose. Thought to be descended from hounds once kept at the Abbey of St Hubert in Belgium, it is known to French speakers as the Chien de Saint-Hubert.This dog is famed for its ability to discern human odors even days later, over great distances, even across water. Its extraordinarily keen olfaction is combined with a strong and tenacious tracking instinct, producing the ideal scent hound, and it is used by police and law enforcement all over the world to track escaped prisoners, missing people, lost children and lost pets.

Compared to other purebred dogs, Bloodhounds suffer an unusually high rate of gastrointestinal ailments, with bloat being the most common type of gastrointestinal problem. The breed also suffers an unusually high incidence of eye, skin, and ear ailments; The oldest of the 82 deceased dogs in the survey died at the age of 12.1 years. Bloat took 34% of the animals, making it the most common cause of death in Bloodhounds. The second leading cause of death in the study was cancer, at 27%; this percentage is similar to other breeds, but the median age of death was unusually young (median of about 8 years).Whether they originated there or what their ancestry was, is uncertain, but from ca. 1200, the monks of the Abbey of St Hubert annually sent several pairs of black hounds as a gift to the King of France. They were not always highly thought of in the royal pack. Charles IX of France 1550-74, preferred his white hounds and the larger Chien-gris, and wrote that the St Huberts were suitable for people with gout to follow, but not for those who wished to shorten the life of the hunted animal. He described them as pack-hounds of medium stature, long in the body, not well sprung in the rib, and of no great strength. Writing in 1561 Jaques du Fouilloux describes them as strong of body, but with low, short legs. He says they have become mixed in breeding, so that they are now of all colours and widely distributed. Charles described the 'true race' of the St Hubert as black, with red/tawny marks above the eyes and legs usually of the same colour, suggesting a 'blanket' black and tan (see Section on Bloodhound#Colour types below). To De Fouilloux the 'pure black' were the best of this mixed breed. Both writers thought them only useful as leash hounds. They both refer to a white hound, also a St Hubert, which by their time had disappeared, having been interbred with another white hound, the greffier, to produce the king’s preferred pack hound, sometimes called the chien blanc du roi.They appear to have been more highly thought of during the reign of Henry IV of France (1553–1610), who presented a pack to James I of England. By the end of the reign of Louis XIV (1715), they were already rare. In 1788, D’Yauville, who was master of the Royal hounds, says those sent by the St Hubert monks, once much prized, had degenerated, and scarcely one of the annual gift of six or eight was kept.Upon the French Revolution of 1789, the gifts ceased, and hunting in France went into a decline until the end of the Napoleonic wars. When it recovered during the 19th Century, huntsmen, with many breeds to choose from, seem to have had little interest in the St Hubert. An exception was Baron Le Couteulx de Canteleu, who tried to find them. He reported that there were hardly any in France, and those in the Ardennes were so cross-bred that they had lost the characteristics of the breed.

The word 'bloodhound' is recorded from c1330. Most recent accounts say that its etymological meaning is ‘hound of pure or noble blood’. This derives from an original suggestion of Le Couteulx de Canteleu Other early sources tell us that hounds were supposed to have an interest in blood, and that the bloodhound was used to follow the trail of a wounded animal.
In the 2012 on-line edition of the OED Dennis Piper suggested 5 alleles in the pattern-marking gene, producing variants from the red or saddle-less hound through three different types of progressively greater saddle marking to the ‘blanket’ type. However, more modern study The surface area of bloodhound olfactory epithelium is 59 sq.in. compared to human's 1.55 sq.in. (10 sq.cm.) However, not all agree that the long ears and loose skin are functional, some regarding them as a handicap. Many bloodhounds will follow the drift of scent a good distance away from the actual footsteps of the quarry, which can enable them to cut corners and reach the end of the trail more quickly. In America, sticking close to the footsteps is called ‘tracking’, while the freer method is known as ‘trailing’ (in the UK, ‘hunting’), and is held to reflect the bloodhound’s concentration on the individual human scent, rather than that of, say, vegetation crushed by the feet of the quarry. Having lost a scent, a good bloodhound will stubbornly cast about for long periods, if necessary, in order to recover it. Whitney preferred waiting till the hound is 18 months old, to start training, Special prizes are on offer for identification and voice ('speaking to the line'). The best hounds may be invited to take part in special stakes, the most difficult being 3 miles long, 24 hours cold. Since the second world war there have been several packs, perhaps most notably that of Eric Furness, who introduced a cross to a Dumfriesshire Hound into his Peak Bloodhounds.
* Doug Heffernan briefly adopts a bloodhound in the King of Queens episode Ruff Goin.
* Hubert is the name of Harlan Pepper's (Christopher Guest) bloodhound in the cult comedy Best in Show (film)
* In the animated show King of the Hill, Hank Hill's beloved dog Ladybird is a bloodhound
*The abilities of bloodhounds were put to the test in two episodes of Mythbusters.
* A bloodhound is seen in the film 102 Dalmatians at Cruella de Vil's dog party. 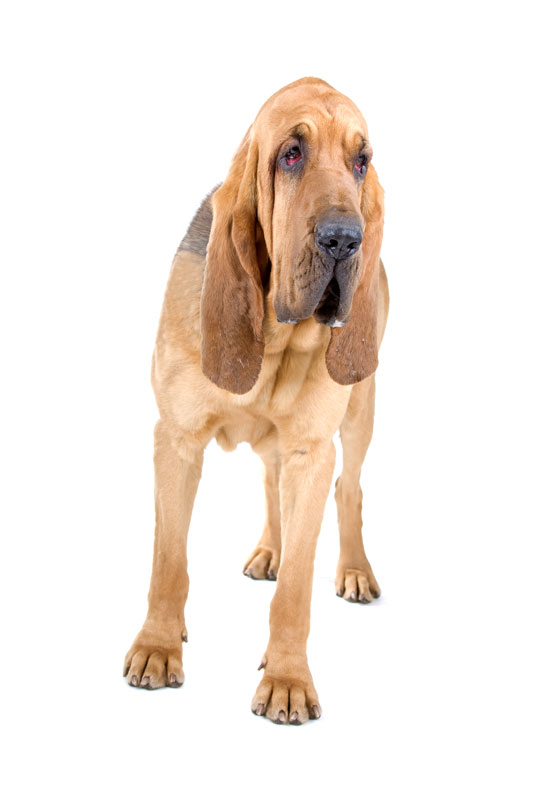