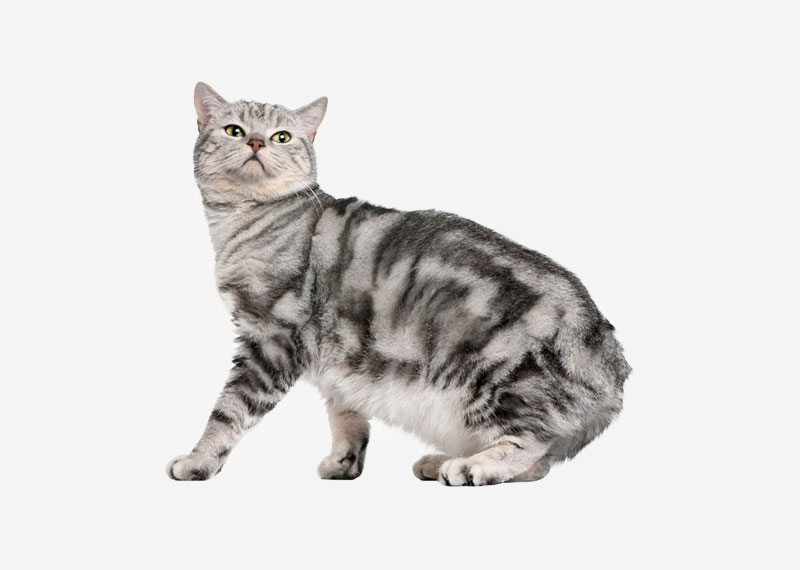 The Manx cat (/ˈmæŋks/; Manx language: kayt Manninagh), in earlier times often spelled Manks, is a breed of domestic cat (Felis catus) originating on the Isle of Man, with a naturally occurring mutation that shortens the tail. Many Manx have a small stub of a tail, but Manx cats are best known as being entirely tailless; this is the most distinguishing characteristic of the breed, along with elongated hind legs and a rounded head. Manx cats come in all coat colours and patterns, though all-white specimens are rare, and the coat range of the original stock was more limited. Long-haired variants are sometimes considered a separate breed, the Cymric. Manx are prized as skilled hunters, and thus have often been sought by farmers with rodent problems, and been a preferred ship's cat breed. They are said to be social, tame and active. An old local term for the cats on their home island is stubbin. Manx have been exhibited in cat shows since the 1800s, with the first known breed standard published in 1903.

Tailless cats, then called stubbin(apparently both singular and plural) in colloquial Manx language, were known by the early 19th centuryas cats from the Isle of Man (Mann), hence the name, where they remain a substantial but declining percentage of the local cat population. The taillessness arose as a natural mutation on the island,though folklore persists that tailless domestic cats were brought there by sea.They are descended from mainland stock of obscure origin.Like all house cats, including nearby British and Irish populations, they are ultimately descended from the African wildcat (F. silvestris lybica)and not from native European wildcats (F. s. silvestris), of which the island has long been devoid.In the Manx language, the modern name of the breed is kayt Manninagh literally 'cat of Mann' (plural kiyt)or kayt cuttagh lit. 'bob-tailed cat'.Manx itself was often spelled Manks well into the late 1800s.There are numerous folktales about the Manx cat, all of them of "relatively recent origin"as they are focused entirely on the lack of a tail, and are devoid of religious, philosophical, or mythical aspects found in the traditional Irish–Norse folklore of the native Manx culture, and in legends about cats from other parts of the world.

The dominant trait of taillessness arises from a spontaneous mutation, the Manx taillessness gene, that eventually became common on the island because of the limited genetic diversity of island biogeography (an example of the founder effect and, at the sub-specific level, of the species-area curve).

The name of the promontory Spanish Head on the coast of the island is often thought to have arisen from the local tale of a ship of the Spanish Armada foundering in the area, though there is no evidence to suggest this actually occurred.Folklore has further claimed that a tailless cat swam ashore from said shipwreck, to found the established breed.However, tailless cats are not commonly known in Spain, even if such a shipwreck were proven.

Regardless of the genetic and historical reality, there are various fanciful Lamarckian folktales that seek to explain why the Manx has a short to no tail. In one of them, the biblical Noah closed the door of the Ark when it began to rain, and accidentally cut off the tail of the Manx cat who had almost been left behind.Over the years a number of cartoons have appeared on postcards from the Isle of Man showing scenes in which a cat's tail is being run over and severed by a variety of means including a motorcycle, a reference to motorcycle racing being popular on the island,and an update of the Noah story. Because the gene is so dominant and "invades" other breeds when crossed (often without owner knowledge) with the Manx, some have believed that simply being in the proximity of a Manx cat could cause other breeds to somehow produce tailless kittens.

Another genetically impossible account claims that the Manx is the offspring of a cat and a rabbit, purporting to explain why it has no or little tail, long hind legs and a sometimes hopping gait.The cat-rabbit halfbreed tale has been further reinforced by the more widespread "cabbit" folktale.

Populations of tailless cats also exist in a few other places in Europe, most notably Cornwall,only 250 miles (400 km) from Mann, an easy sail. A population on the small, isolated Danish peninsula (former island) of Reersø in the Great Belt may be due to the arrival on the island of shipwrecked cats of Manx origin.Similar cats are also found in Crimea,a near-island Black Sea peninsula, though whether they are genetically related to maritime Manx cats or are a coincidentally similar result of insular genetic diversity limitations, like the unrelated Kuril Islands Bobtail, Karelian Bobtail and Japanese Bobtail, is unknown. The Manx gene may be related to the similarly dominant tail suppression gene of the recent American Bobtail breed, but Manx, Japanese Bobtails and other short-tailed cats are not used in its breeding program, and the mutation seems to have appeared in the breed spontaneously.Possible relation to the Pixie-bob breed, which also ranges from rumpy to fully tailed, is unknown.

The Manx taillessness gene is dominant and highly penetrant; kittens from two Manx parents are generally born without any tail. Being homozygous for (having two copies of) the gene is usually lethal in utero, resulting in miscarriage.Thus, tailless cats can carry only one copy of the gene. Because of the danger of having two copies of the taillessness gene, breeders avoid breeding two entirely tailless Manx cats together.Because neither parent carries the tailless allele, a tailed Manx bred to a tailed Manx results in all tailed kittens. Breeders have reported all tail lengths in the same litter, and there is no accurate means to predict the ratio of tailed to tailless kittens produced in each litter.

Some partial tails are prone to a form of arthritis that causes the cat severe pain,and in rare cases Manx-bred kittens are born with kinked short tails because of incomplete growth of the tail during development; kittens with stumpy to long tails have sometimes been docked at birth as a preventative measure.

"Manx syndrome" or "Manxness" is a colloquial name given to the condition which results when the tailless gene shortens the spine too much. It can seriously damage the spinal cord and the nerves causing a form of spina bifida as well as problems with the bowels, bladder, and digestion. Very small bladders are indicative of the disease and it is often difficult to diagnose. Death can occur quite suddenly and some live for only 3–4 years; the oldest recorded was 5 years when affected with the disease. In one study it was shown to affect about 30% of Manx cats, but nearly all of those cases were rumpies, which exhibit the most extreme phenotype.Such problems can be avoided by breeding rumpy Manx cats with stumpy specimens and this breeding practice is responsible for a decline in spinal problems among modern, professionally bred Manx cats today.Most pedigreed cats are not placed until four months of age (to make sure that they are properly socialised) and this usually also gives adequate time for any such health problems to be identified.Renowned feline expert Roger Tabor has stated: "Only the fact that the Manx is a historic breed stops us being as critical of this dangerous gene as of other more recent selected abnormalities."The breed is also predisposed to rump fold intertrigo and corneal dystrophy.

Some tailless cats such as the Manx cats may develop megacolon which is a recurring condition causing constipation that can be life-threatening to the cat if not properly monitored. It is a condition in which, due to absence of a tail, the smooth muscle that normally contracts to push stools toward the rectum loses its ability to do so.

The Isle of Man uses the Manx cat as one of the symbols of the island nation and its unique culture. On Isle of Man currency, Manx cats are the subject of the reverse of three special commemorative crown coins. The first two, issued in 1970 and 1975, are stand-alone releases in both copper-nickel and silver proofs, while the third in 1988 inaugurated an ongoing series of annual cat coin issues that have also been produced in gold in various sizes; an almost-hidden Manx cat appears in the background on each of the 1989-onward releases featuring other breeds.A Manx cat also appears on the island's 1980–83 penny. The breed figures on numerous Isle of Man postage stamps, including a 2011 series of 6 that reproduce the art from Victorian era Manx cat postcards,a 1996 one-stamp decorative sheetlet, one stamp in a 1994 tourism 10-stamp booklet, a 1996 five-stamp series of Manx cats around the world, and a 1989 set of the breed in various coat patterns, plus two high-value definitives of 1983 and 1989. The cat appears prominently as the subject of a large number of tourist goods and Manx pride items available on the island and over the Internet, serving (along with the triskelion) as an emblem of the Isle of Man.

The Norton Manx motorcycle line (1947–1962, Norton Motors Ltd.), though ostensibly named after the Isle of Man TT road race (which the brand dominated for decades, until the 1970s), was long promoted with Manx cat badges, in the forms of both enameled metal pins and sew-on patches. The Manx Norton has experienced a major revival among modern enthusiasts of classic motorcycle racing.

The Meyers Manx (1964–1971, B. F. Meyers & Co.) is the original (much-copied), iconic Volkswagen Beetle-based dune buggy, and broke desert racing records shortly after its introduction. It was named after the cat, due to its design – short-bodied, tall-wheeled, and manoeuvrable. The original designer has revived and updated it as the "Manxter" (2000–present, Meyers Manx, Inc.).

A popular flying model aircraft of the late 1950s was the Manx Cat, sold in kit form in various versions. The biplane model was profiled in hobbyist magazines, like the February 1957 Flying Models and October 1958 American Modeler, and remains a sought-after collectors' item in online auctions.

A Grimjack comic book story, The Manx Cat, was serialised as a Comicmix.com webcomic in January 2011, and has since seen print as a six-issue miniseries by IDW Comics. The story involves "The Manx Cat", a statuette of such a cat that at first seems to be a simple MacGuffin like the classic Maltese Falcon of novel and films of that name, but which begins showing malevolent powers. The plot thickens with time travel, reincarnation, and Cthulhu Mythos-style "elder gods". Like most modern comics, it features digitally-created art.