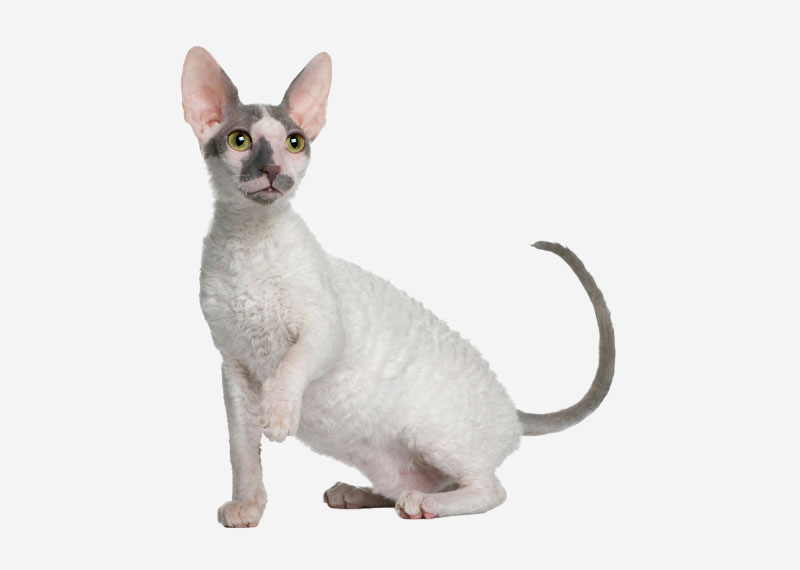 A Cornish Rex is a breed of domestic cat. The Cornish Rex has no hair except for down hair. Most breeds of cat have three different types of hair in their coats: the outer fur or "guard hairs", which is about 5 cm long in shorthairs and 10 cm+ long in longhairs; a middle layer called the "awn hair"; and the down hair or undercoat, which is very fine and about 1 cm long. Cornish Rexes only have the undercoat. The curl in Cornish Rex fur is caused by a different mutation and gene than that of the Devon Rex. It originates from Cornwall, Great Britain.The coat of a Cornish Rex is extremely fine and sometimes curly, the softest of any cat breed. However, their light coat means that they are best suited for indoor living in warm and dry conditions, as they might get hypothermia if they stay outdoors in the winter. Their body temperature of zh:沙特爾貓 is slightly higher than that of most cats, with Cornish Rexes tending to hang around warm places such as computer monitors, light bulbs, laps and shoulders. Some Cornish Rexes also have a mild cheesy smell peculiar to the breed; this odor comes from scent glands in the paws.Often the breed is referred to as the Greyhound of the cats, because of the sleek appearance and the galloping run characteristic of the breed. These cats tend to stay playful and kittenish throughout their long lives. Some Cornish Rexes like to play fetch, race other pets or do acrobatic jumps. The Cornish Rex is an adventurous cat and is very intelligent. It can readily adapt to new situations and will explore wherever it can go, jumping into refrigerators, examining washing machines, etc. The Rex is extremely curious, seeks out the company of people and is friendly towards other companion animals. It is a suitable pet for timid children.Cornish Rex cats come in a wide variety of coat colours and patterns, outlined in the : solids, including white, black, chocolate orange and the dilutes blue, lilac and cream; all forms of Tabby cat including classic, mackerel and ticked tabbies, Bicolor cat "tuxedo" coat in many colours, Tortoiseshell cat, "smoke" colours and the colour-point pattern standard in the Siamese breed.In 2013 researchers identified the mutation that defines the Cornish Rex breed. Genome-wide analyses were performed in the Cornish Rex breed and in 11 phenotypically diverse breeds and two random bred populations. A gene on chromosome A1, the lysophosphatidic acid receptor 6 (LPAR6), was identified to have a 4 base pair deletion. This induces a premature stop codon in the receptor which is absent in all straight haired cats analyzed. LPAR6 encodes a receptor essential for maintaining the structural integrity of the hair shaft. In humans LPAR6 mutations result in a wooly hair phenotype One of the kittens, a cream-colored male named Kallibunker, had an extremely unusual, fine and curly coat; he was the first Cornish Rex. The owner then backcrossed Kallibunker to his mother to produce 2 other curly-coated kittens. The male, Poldhu, sired a female called Lamorna Cove who was later brought to America and crossed with a Siamese (cat), giving the breed their long whippy tails and big ears.The Devon Rex looks similar in appearance to the Cornish Rex, but has guard hairs and sheds. The Devon Rex mutation is different from the Cornish Rex mutation in that the Devon has shortened guard hairs, while the Cornish Rex lacks guard hairs altogether. Crosses between Devon and Cornish Rexes are not permitted in pedigrees and matings between them will not produce a cat with short wavy fur. Another hair-deficient breed is the Sphynx (cat), which has no hair but may have a very light coat of fuzz.Using the word "Rex" to imply curly or otherwise unusual fur originates from an occasion when King Albert I of Belgium (1875-1934) entered some curly-haired rabbits in a rabbit show. They did not meet the breed standard, but the show's officials did not wish to risk offending the king by rejecting them. Instead, they accepted them but wrote "Rex" (Latin for "king") beside their names.Cornish Rex (and other Rex breeds) are at risk for dangerous and potentially deadly side effects due to certain anesthetics. Veterinary medical care providers should err on the side of caution, and use special milder anesthetics for surgery. 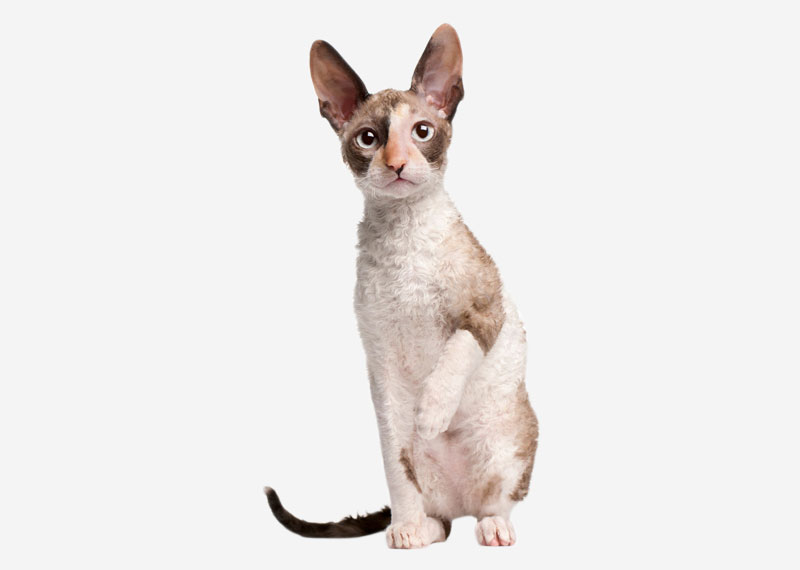 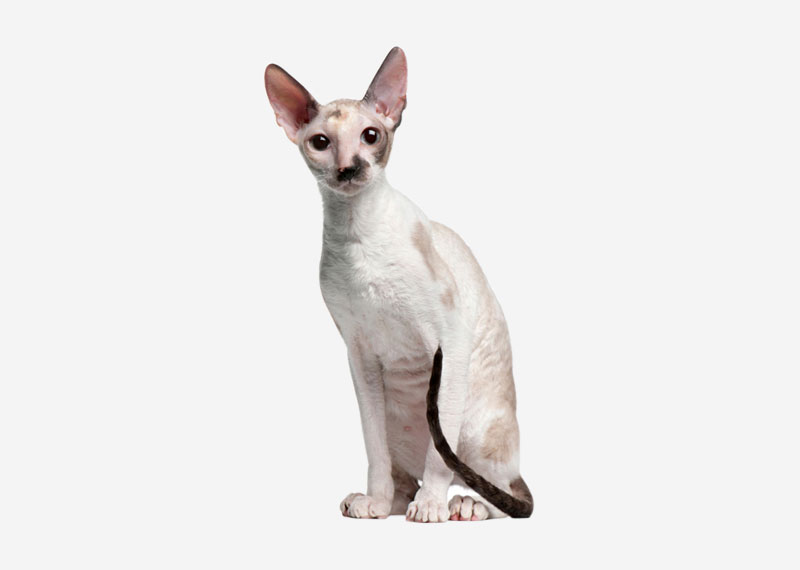