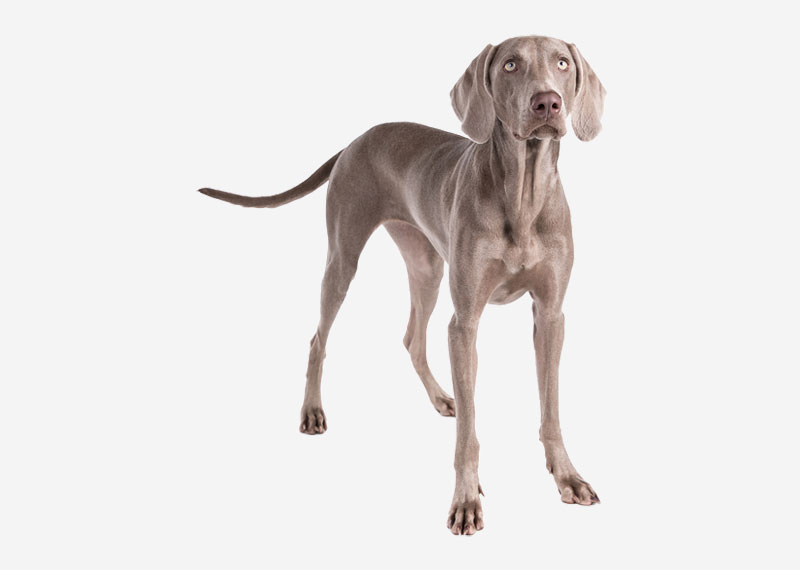 Today's breed standards are alleged to have developed in the late 18th and early 19th century, although dogs having very similar features to the Weimaraner have supposedly been traced as far back as 13th century in the court of Louis IX of France. One theory is that the ancestor is the St. Hubert Hound (also known as the Bloodhound and Sleuth Hound) . Though these dogs are black, they can produce a grey dog when bred. Like the Vizsla at the time, the breed was created exclusively for the nobility and alike. The aim was to create a noble-looking, reliable gundog. As ownership was restricted and natural instinct, the breed was highly prized and lived with the family. This was unusual, as during this period, hunting dogs were kept in kennels in packs. This has resulted in a dog that needs to be near humans and that quickly deteriorates when kenneled. The Weimaraner was an all purpose family dog, capable of guarding the home, hunting with the family, and of course, being loving and loyal towards children.Originally, Germany was possessive of its skilled all-purpose gundog. Some of the earliest Weimaraners, prior to being sent to America for breeding, were sterilized in order for America not to popularize their special breed. But starting in the late 19th century the breed became increasingly common throughout Europe and the United States. Although slower than many other gundogs, such as Pointer (dog breed), the Weimaraner is thorough and this made it a welcome addition to the sportsman's household. The breed's happy, lively temperament has endeared it to families. With the rise in popularity, some changes have been made to the breed. Both in Britain and America (where the breed remains popular) breeders have taken care to breed to a standard.