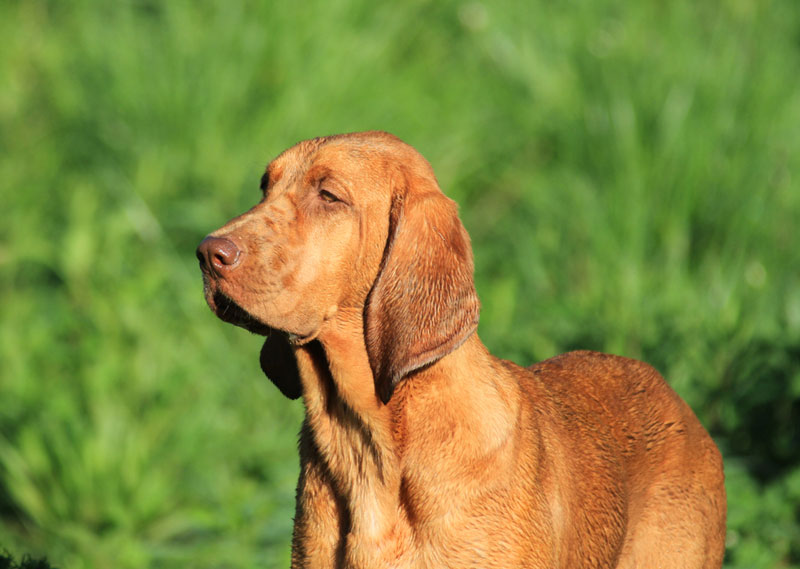 The Redbone Coonhound is an American breed of dog widely used for hunting bear, raccoon, and cougar. Their agility allows them to be used for hunting from swamplands to mountains and some can be used as water dogs. The American Kennel Club standard says, "The Redbone mingles handsome looks and an even temperament with a confident air and fine hunting talents." This breed has been registered with the United Kennel Club since 1904 and the American Kennel Club since 2009. This is the type of hound featured in the novel Where the Red Fern Grows.

In the late 18th century, many European type hunting dogs were imported to America, most of them of Scottish, French, English, and Irish ancestry: the English Foxhound, the Harrier, the Grand Bleu de Gascogne, the Welsh Hound, the beagle, and the Bloodhound were among these. Most often, these dogs were imported so that wealthy planters of the Tidewater region of Virginia could mimic the European gentry and engage in foxhunting, with smaller amounts of dogs winding up on small farms. However, after the American Revolution, as settlement pushed farther West and deeper South, hunters discovered they had a problem: the hounds imported from the late 18th and early 19th century British Isles and France were bred to hunt in different terrain than what was on offer in the American South. By late in the reign of George III much of the original oak forests of England, Scotland, and Ireland had long since been cut down to service the Royal Navy and many of the peat bogs were being mined for use as a source of fuel; with the exceptions of badgers, rabbits, and foxes much of the original fauna that would have inhabited these lands had become extirpated over time. The French aristocracy owned a few private reserves for themselves to hunt in, but typically their dogs could get away with having a colder nose as the amount of land to hunt on was still limited. This was in stark contrast to the American South, which included many hundreds of miles of subtropical bald cypress swamps and hardwood forest . The terrain was loaded with animals that would fight back viciously to the death, like alligators, American black bear, porcupines, cougars or raccoons. When confronted with such conditions the European breeds were almost useless since none of the aforementioned animals burrow into the ground or passively run from trouble: when confronted with prey that climbed a tree or in some cases tried to throw off their pursuers in deep, swampy water, the dogs would mill about pacing below the tree, confused. When confronted with porcupines, they would sometimes even flee when the lead dog was quilled. Over time, Southern hunters would selectively breed dogs that would not back down, had great stamina, and would "hound" their prey until they treed or cornered their exhausted quarry, leading to modern coonhounds. In the late 18th century Scottish immigrants brought with them red colored foxhounds to Georgia, dogs which would be the foundation stock of the Redbone. Later, c. 1840 Irish bred Foxhounds and Bloodhound lines were added to the mix. The name would come from an early breeder, Peter Redbone of Tennessee, though other breeders of note are Mr. Redbone's contemporary, Georgia F.L. Birdsong of Georgia, and the Dr. Thomas Henry in the 19th century. Over time, breeders followed a selective program that led to a coonhound that is more specialized for prey which climbs trees relative to European hunting dogs, was unafraid of taking on large animals, was agile enough to carry on over mountain or in meadow, and liked to swim if necessary. They were ideal for pack hunting of both small and larger prey. Originally, the Redbone had a black saddleback, but by the beginning of the 20th century, they were an uninterrupted red tone.Like many American hunting dogs, especially those from the Deep South, they were widely known and loved by hunters and farmers, but totally unknown in the conformation show ring. Recently, this has changed, and the Redbone has found recognition by the two major American kennel clubs. Unfortunately, for reasons of its main use as a hunting dog rather than a show dog Redbones are extremely rare dogs outside of the United States. There are very few breeders outside of North America of this hound and it is virtually unknown in Europe or Australia.The Redbone Coonhound is also shown in books and films such as "Where the Red Fern Grows." "Where the Red Fern Grows" is a story about a young boy and his coonhounds enjoying life with the hunt. The book is found at many library's across the country and teaches a lifelong lesson about love and friendship.