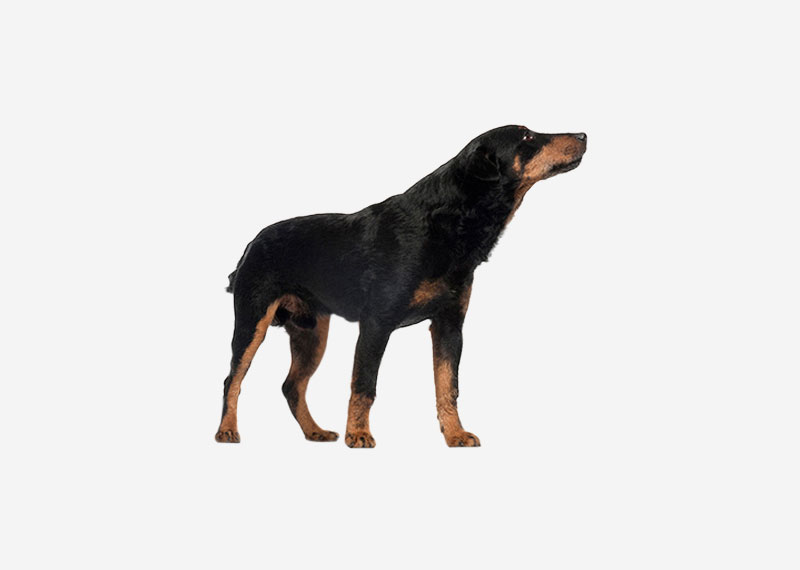 The Doberman Pinscher (alternatively spelled Dobermann in many countries) or simply Doberman, is a breed of domestic dog originally developed around 1890 by Karl Friedrich Louis Dobermann, a tax collector from Germany. Doberman Pinschers are among the most common of pet breeds, and the breed is well known as an intelligent, alert, and loyal companion dog. Although once commonly used as guard dogs or police dogs, this is less common today.In many countries, Doberman Pinschers are often one of the most recognizable breeds, in part because of their actual roles in society, and in part because of media attention. Recent careful breeding has greatly improved the disposition of this breed, and the modern Doberman Pinscher is an energetic and lively breed suitable for companionship and family life. Although many Dobermans have been outdoor dogs, they are best suited to live indoors.

Doberman Pinschers were first bred in the town of Apolda, in the Germany state of Thuringia around 1890, following the Franco-Prussian War by Karl Friedrich Louis Dobermann. Dobermann served in the dangerous role of local tax collector, and ran the Apolda dog pound. With access to dogs of many breeds, he aimed to create a breed that would be ideal for protecting him during his collections, which took him through many bandit-infested areas. He set out to breed a new type of dog that, in his opinion, would be the perfect combination of strength, speed, endurance, loyalty, intelligence, and ferocity. Later, Otto Goeller and Philip Greunig continued to develop the breed to become the dog that is seen today.The breed is believed to have been created from several different breeds of dogs that had the characteristics that Dobermann was looking for, including the German Pinscher, the Beauceron, the Rottweiler, the Thuringian Sylvan Dog, the Greyhound, the Great Dane, the Weimaraner, the German Shorthaired Pointer, the Manchester Terrier, the Old German Shepherd Dog.
. The exact ratios of mixing, and even the exact breeds that were used, remain uncertain to this day, although many experts believe that the Doberman Pinscher is a combination of at least four of these breeds. The single exception is the documented crossing with the Greyhound and Manchester Terrier. It is also widely believed that the old German Shepherd gene pool was the single largest contributor to the Doberman breed. Philip Greunig'sThe Dobermann Pinscher (1939), is considered the foremost study of the development of the breed by one of its most ardent students. Greunig's study describes the breed's early development by Otto Goeller, whose hand allowed the Doberman to become the dog we recognize today. The American Kennel Club believes the breeds utilized to develop the Doberman Pinscher may have included the old shorthaired shepherd, Rottweiler, Black and Tan Terrier and the German Pinscher.