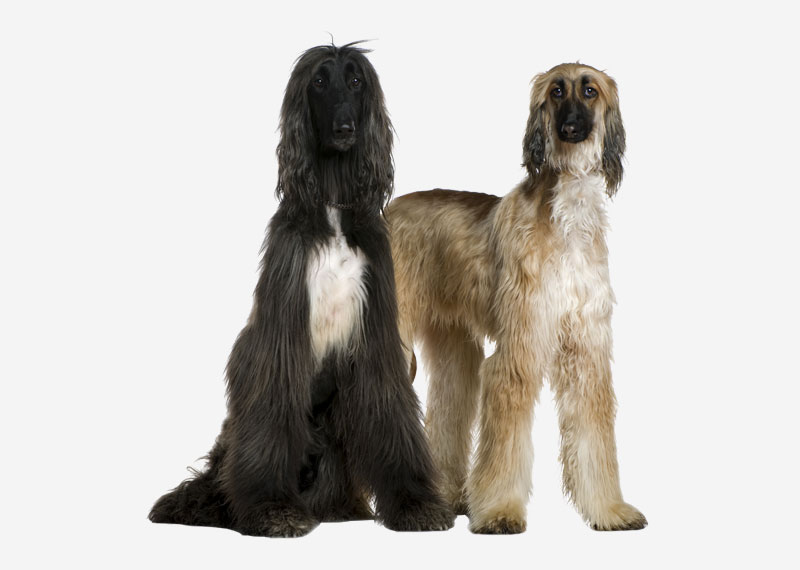 The Afghan Hound is a hound that is one of the oldest dog breeds in existence. Distinguished by its thick, fine, silky coat and its tail with a ring curl at the end, the breed acquired its unique features in the cold mountains of Afghanistan. Its local name is Tāžī Spay or Sag-e Tāzī (Dari Persian: سگ تازی). Other alternate names for this breed are Koochee dog, Tāzī, Balkh Hound, Baluchi Hound, Barutzy Hound, Shalgar Hound, Kabul Hound, Galanday Hound or sometimes incorrectly African Hound.

Sighthounds are among the oldest recognisable Dog type of dogs, and genetic testing has placed the Afghan Hound breed among those with the least genetic divergence from the wolf on some markers; this is taken to mean that such dogs are descended from the oldest dog types, not that the breeds tested had in antiquity their exact modern form. Today's modern purebred breed of Afghan Hound descends from dogs brought in the 1920s to Great Britain, and are a blending of types and varieties of long haired sighthounds from across Afghanistan and the surrounding areas. Some had been kept as hunting dogs, others as guardians.Although demonstrably ancient, verifiable written or visual records that tie today's Afghan Hound breed to specific Afghan owners or places is absent, even though there is much speculation about possible connections with the ancient world among Animal fancy and in non-scientific breed books and breed websites. Connections with other types and breeds from the same area may provide clues to the history. A name for a desert coursing Afghan hound, Tazi (sag-e-tazi), suggests a shared ancestry with the very similar Tasy breed from the Caspian Sea area of Russia and Turkmenistan.Other types or breeds of similar appearance are the Taigan from the mountainous Tian Shan region on the Chinese border of Afghanistan, and the Barakzay or Kurram Valley Hound. There are at least 13 types known in Afghanistan, and some are being developed (through breeding and recordkeeping) into modern purebred breeds. As the lives of the peoples with whom these dogs developed change in the modern world, often these landrace types of dogs lose their use and disappear; there may have been many more types of longhaired sighthound in the past.Once out of Afghanistan, the history of the Afghan Hound breed becomes an important part of the history of the very earliest dog shows and The Kennel Club (UK). Various sighthounds were brought to England in the 1800s by army officers returning from British India (which at the time included), Afghanistan, and Persia, and were exhibited at dog shows, which were then just becoming popular, under various names, such as Barukzy hounds. and became the early ideal of breed type for what was still called the Persian Greyhound. Zardin was the basis of the writing of the first breed standard in 1912, but breeding of the dogs was stopped by World War I.The breed has a reputation among some dog trainers of having a relatively slow "obedience intelligence" as defined by author Stanley Coren in The Intelligence of Dogs (book).Although seldom used today for hunting in Europe and United States where they are popular, Afghan hounds are frequent participants in lure coursing events and are also popular in the List of dog sports of conformation showing.

Major health issues are allergy, cancer, and hip dysplasia (canine). Sensitivity to anesthesia is an issue the Afghan hound shares with the rest of the sighthound group, as sighthounds have relatively low levels of body fat. Afghan hounds are also among the dog breeds most likely to develop chylothorax, a rare condition which causes the thoracic ducts to leak, allowing large quantities of Chyle to enter the dog's chest cavity. This condition commonly results in a lung torsion (in which the dog's lung twists within the chest cavity, requiring emergency surgery), due to the breed's typically deep, "barrel"-shaped chest. If not corrected through surgery, chylothorax can ultimately cause fibrosing pleuritis or a hardening of the organs, due to scar tissue forming around the organs to protect them from the chyle fluid. Chylothorax is not necessarily, but often, fatal.

Because of its distinctive appearance, the Afghan hound has been represented in animated feature films, including Universal Pictures' Balto (Sylvie), Disney's Lady and the Tramp II (Ruby), an Afghan hound also appeared on 101 Dalmatians as well as in 102 Dalmatians as one of the dogs in Cruella De Vil's party and the television series What-a-Mess (Prince Amir of Kinjan; based on children's books by Frank Muir) and, as Prissy in the 1961 Disney animated film One Hundred and One Dalmatians and 101 Dalmatians II: Patch's London Adventure. Afghan hounds have also been featured in television advertisements and in fashion magazines. The Afghan hound is represented in books as well, including being featured in a series of mystery novels by Nina Wright (Abra), and a talking Afghan Hound in David Rothman's The Solomon Scandals (2008, Twilight Times Books). In the novel Between the Acts, Virginia Woolf uses an Afghan hound (named Sohrab) to represent aspects of one of the book's human characters.On August 3, 2005, Korean scientist Hwang Woo-Suk announced that his team of researchers had become the first team to successfully cloning a dog, an Afghan Hound named Snuppy. In 2006 Hwang Woo-Suk was dismissed from his university position for fabricating data in his research. Snuppy, nonetheless, was a genuine clone, and thus the first cloned dog in history.In the BBC Three Sitcom Mongrels (TV series) the character of Destiny is an Afghan Hound.In the 2010 comedy Marmaduke (film), two Afghan hounds appear in the dog park and are shown to resemble high school girls watching the more athletic dogs as if they were "jocks" and are also shown to be "air heads".The Afghan Hound features prominently in the avant-garde music video of popular French band M83's, "Set in Stone (M83 Remix)." In the FX animated series Archer (TV series), the titular protagonist's mother mourns the death of her Afghan Hound "Duchess" as a recurring gag throughout the show. 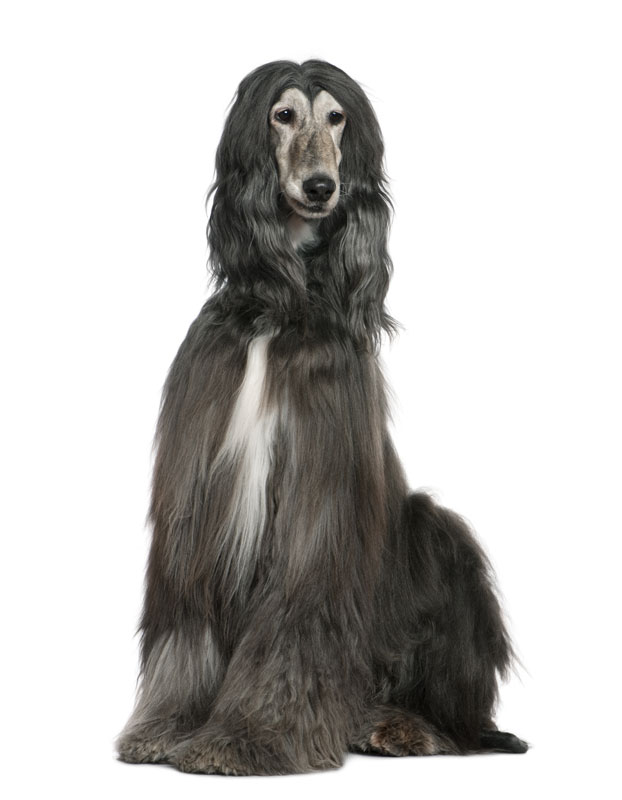